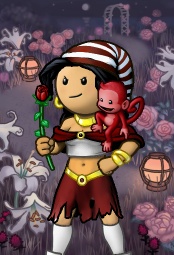 Anubiss sails the Viridian Ocean. She is currently Captain of the crew Temple of Hathor and princess of the flag Vanguard. Anubiss governs Swampfen Island and Dendrite Island.

Anubiss spends her days lazing around other peoples homes and playing spades. She also loves to spend time with her fellow flag members, for instance Rose-Picking is one of her favorites. Her best buddy in Vanguard, Dragonblade, adores her so much, he put her up on his Infopage under special hearties. It is supposed to say "Anubiss kissed a girl the taste of cherry chapstick" a reference to the song I Kissed a Girl by Katy Perry.

Here are some songs of hers: