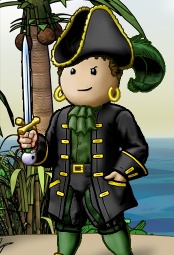 Grimes is a retired pirate, last sailing with Pirates of the Damned on Midnight and under the name Newcastle on Malachite.

Grimes is also one of the winners of the Design the Oceans Contest.[1] His excellent design work can be seen at Conglin Island on the Cerulean and Meridian oceans (as well as on the retired/merged oceans of Cobalt, Crimson, and Viridian).

Grimes first joined as Grimeserror in August, 2003, as a beta tester. Along with others from the website 404 Error/GameDaily, he sailed in the crew Invisible Strike, under Errorjustin. Although the crew was active in Azure, only a handful made the transition to Midnight, under the crew name Dark Strike. Grimes was among them.

In the early days of the ocean, Dark Strike moved from flag to flag, and Grimes honed both his political and puzzling skills. He rose to the rank of lord of Exsilium before the crew left during upheaval. The second season of Midnight's Olympic Champions League brought him in contact with Thanos. After a swordfighting challenge and some time pillaging, Grimes made it on Thanos' brawling and sea battle teams. His Sailing ability also won him passage on lucrative pillaging trips among the ocean's elite.

After Exsilium, Dark Strike moved to Imperio. During their time there, Dark Strike's captain, Rypken, relinquished command to Grimes, who not only received the captaincy, but a spot on Imperio's royal council as well. His rise to royalty came during tensions between his crew and flag—tensions only increased during his tenure. Feeling ill-represented, Grimes moved Dark Strike out of Imperio, sparking the Avalon split. Taking refuge under Misery in Crimson Tide, he was again made royalty, and two of his mates were titled. Crew activity was low, however, and after consulting with his former captain, Grimes and crew decided to disband rather than fade to obscurity.

Staying with Crimson Tide, Grimes joined Pirates of the Damned in January, 2005. He remained royalty until September, 2005, when he willingly resigned his post amid real life time constraints.

After a period of retirement, Grimes met up with former Beta crewmates Rypken and Korpus to give the newly opened Malachite ocean a try. After reuniting with numerous old friends from Invisible Strike and Dark Strike, the crew Fatal Strike was born. Rejoining Thanos, Grimes and his crew proudly sailed together under the Barely Dressed banner, helping to shape the flag to what it is today.

Grimes can be found once again on Midnight with the Pirates of the Damned.