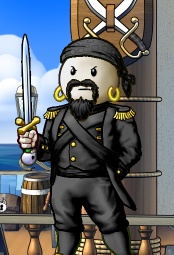 Thanos began playing early in the beta development stage on the Azure Ocean. He rose to fame with his crew: Pirates of the Damned in the flag Crimson Tide. (Both the crew and the flag are still around and influential.) Thanos earned a reputation as the "bad boy" of the game on Azure by hoarding wood and elderberries; essentially controlling the market for those commodities. He also gained the ire of the Ocean Masters by planking them from his vessel during an event.

Thanos remade his crew and flag on the Midnight Ocean. He and Pennsuedo were famed for their repeated public clashes on the forums and in-game. The two were responsible for the first use of the war mechanic. The war lasted a mere four hours.

A few months into Midnight, Thanos gave up the monarchy; Misery, his second in command, took over the throne. A while later, Thanos left the flag for various undisclosed reasons. For over a year, Thanos retired from the game. He would occasionally post on the forums, but was otherwise inactive. He recently came out of retirement to start anew on the Cobalt Ocean.

Till december 2008 Thanos could be found on the Malachite Ocean as king of Barely Dressed, but now he is retired.