A gold box is an opportunity to get a random prize. They can be purchased from any Gold Safe furniture item for the sum of 12 doubloons, or 25,000 Pieces of Eight on subscription oceans. Gold safes can be reliably found inside the bank on any major island.

Gold boxes are available only for a limited time every other month; specifically, in February, April, June, August, October, and December. Gold safes will sell the boxes during a ten-day period, starting at 10am Pirate Time on the first Friday of these months, and ending at 3pm Pirate Time on the second following Monday. 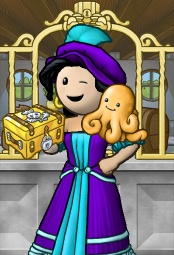 Gold Box being held in a portrait.

Gold boxes are identical to presents in functionality (including usage as floor furniture), but they come with a random item inside of them. The prizes that can be found inside gold boxes are listed below, along with their probability of appearance. Box contents and odds may change in future versions.

An archive of previous releases is available.

Gold box trinkets may be held in portraits.

(The numbers in parenthesis represent the first gold box series in which the specified trinket was found. They may also be found in all subsequent series.)

Gold boxes also give out clothing items. Pirates can win golden conquistador armor and knight's helms in both male and female.

The seasonal color applied to trinkets and chromas available from the Gold Box rotates by month:

These potions are miscellaneous items that can be used to temporarily give your pirate unnatural hair colors. The color change lasts until log-off. Color availability varies by month.

Crystal balls are desktop furniture items that can be used to read your pirate's daily fortune. Color availability varies by month, and each color has a different face in view two. View one is the same for all colors. (Use either left/right arrow keys or a mouse scroll-wheel to change the item's view when placing it in a scene.)

Piggy banks can be either empty or filled with PoE. The ones filled with money are a type of miscellaneous item. Cracking one open destroys the piggy bank and grants a pirate the PoE contained inside. The golden piggy banks found in the gold box contain a minimum of 20,000 PoE, with chances of receiving even larger amounts. Empty golden piggy banks, on the other hand, are a tabletop furniture item.

Gold box trinkets can be traded into any trading post for a variety of unique rewards.