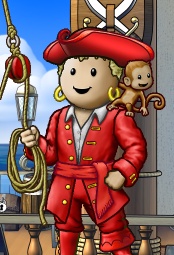 In-game husband to Liska and citizen of Eta Island.

Senior Officer of the Ransack Marauders and King of Marauders Pact.

Pjotr was recruited as a young green pirate into the Ransack Marauders by Calicohydro in February 2004, straight from the docks of Epsilon. The young pirate was the first to be trained using Chihiro's Officer Training program, a comprehensive guide to officerhood and battle navigation. Pj was a quick learner, mastering several puzzles and gaining ultimate rankings within a few months. He took a decisive position in the crew, seeking to help steer its direction and newer mates. His budding leadership skills became all the more prominent as he used his finely honed battle navigation skills to lead many successful pillages, always retaining a gently quiet and calm attitude throughout his victories. Assertive enough to lead, and helpful enough to be viewed as something of a mentor, Pj was promoted to the position of senior officer on around March 23rd, 2004. His patience with greenies and newer crewmates was further rewarded by the crew in the Green Turban awards of April 2004.

As 2004 continued, the crew's first shoppe was built; String Theory, a weavery on Eta Island. Pjotr took over ownership of the shoppe from Ironfisted after its initial few weeks, establishing its place in commerce on the island. The senior officer continued to oversee the running of the shop until mid-October, when he handed over the deed to Feegle. In early December, Pjotr stepped up to take over the role of the crew's royalty representative from Chihiro, holding the demanding position of prince for two months until the February of the new year.

In March 2005, Acute Irony, an ironmonger was built on Eta and owned by the crew. Pjotr assisted the owner, Calicohydro in the running of the shop, his key work allowing the shoppe to compete with the other already established ironmongers on the island. Later that year, on September 1st, Pjotr was appointed to the position of captain of the crew, taking over from Shark. The captain led a sloop team to victory in the first round of the event blockade; Battle of Trafalgar in October, winning a ribbon trinket for his efforts. With the establishment of the crew's own independent flag, Marauders Pact in April 2006, Pjotr took the position of Prince in the flag, reflecting his continued role as a representative of the crew to the rest of the ocean.

In February 2007, Pjotr stepped down as Captain.