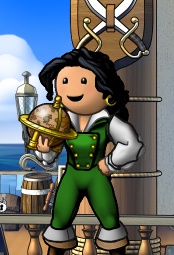 Chihiro is the in-game wife of Ironfisted and citizen of Eta Island on the Midnight Ocean. She is captain of the Ransack Marauders.

Chihiro began her Puzzle Pirates career in December 2004, when she left her former crew, Shadowlink under the guidance of Ironfisted and helped to form the Ransack Marauders. The young officer was quickly promoted to senior officer as the new crew sought to recruit and grow, Chihiro's firm but fair rules of conduct aboard the crew's pillages remaining a principle of RM until today. Early February 2004 saw Chihiro's tendency for a tightly run ship develop into her creation of a comprehensive Officer Training program, the pirate taking responsibility for much of the training of new and potential officers within the crew. Pjotr was the first Officer in Training to learn using the new system. The OiT program earned Chihiro the first ever prize in the Green Turban awards, for her sterling contributions to the overall quality of the crew's officers.

February 2004 saw Chihiro's entry into flag politics, as captain Ironfisted stepped down from the intense position of crew royalty representative and appointed Chihiro in his stead. She served as a princess of the flag until December 2004. June 2004 saw the 6 month bash, celebrating the crew's anniversary. One of the main events of the entire occasion was the supposed shotgun wedding of Chihiro to the captain, Ironfisted, a storyline that had been well planned in advance. The marriage of Chihiro and Ironfisted remains one of the crew's fondest and silliest jokes.

On 22nd July 2004, Eta Island opened for colonisation and Silver Dawn sought to take it for their home. Chihiro had the honour of dropping the warchest on the island, 24 hours before the blockade began. During her tenure as princess, the pirate was titled as a Lady of Silver Dawn in light of her continued vocal presence on the royalty council, and various resources created for the flag.

The aftermath of Spuggy's resignation from the monarchy of Silver Dawn and the departure of several of its crews left the flag in a precarious state. Chihiro put herself foward for the position of monarch in the January elections, stating her desire to pull the flag together as her primary motivation for seeking the crown. She was successful in her bid, her coronation on January 24th 2004 being a quiet affair as requested, her intents and purposes lying in getting the flag back on its feet. Chihiro's reign as monarch of Silver Dawn was perhaps the most notable after that of Attesmythe, as she guided the flag to recovery after the loss of several crews and leading figures, and through the heated Scallywag War. Before her resignation in August 2005, Chihiro created the monarch's cabinet, an internal system of flag organisation designed to reduce the pressures of ruling a flag of SD's size.

With the departure of the Ransack Marauders from their long-time flag, Chihiro updated the officer training program extensively, bringing it in line with developments, both social and mechanical, in the game. She was appointed as a princess of the crew's new independent flag; Marauders Pact upon its creation.

In February 2007, Chihiro took over as captain from Pjotr.