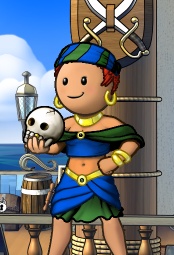 Ellieneo (pronounced Ellie Neo) is a pirate on the Midnight Ocean. She joined on August 18th, 2007, and was born on Oyster Island, where she owns a small shack, and got her rat named Alex. When she joined, she was quickly snatched up by the crew Wolf's Dragoons, a very cool and supporting crew of the flag Morgan's Marauders. She fit in nicely with the crew, and was soon promoted to pirate, then officer. She'd always wanted her own crew, however, and in January 2008, she made one. (See below for details.)

In late August 2007, she bought a one-month subscription to the game, and was thrilled to be able to start Blacksmithing. This is now her favorite game.

By early September of 2007, Ellie had saved up enough PoE to buy herself a sloop, The Hard-Headed Barbel. She promptly painted her new ship in blue and green, her crew colors. She then moved it to Oyster, where it now sits.

In early October 2007, she bought a dog, and named him Korben, after her dog she had to leave behind with a friend in real life. He is a great dog, but he only likes Ellie, and will growl at just about anyone else. For this reason, when her subscription ran out in mid-month, she put Korben on The Hard-Headed Barbel to guard it. He does a great job.

On November 4th, 2007, Ellie added a roommate to her shack. Her roommate's name was Calicojane, and is a real life friend of Ellie's. As soon as Cali joined, Ellie got her into Wolf's Dragoons. Unfortunately, Cali didn't have much time to play, and her character was deleted. Ellie found a new roommate on February 1st, 2008. His name is Ihavenobeard, and he is also a real life friend of Ellie's, and is also one of her crew members.

On November 5th, 2007, Ellie renewed her subscription to the game and is hoping to have it never run out again. She is saving up to buy a crew portrait and paint for her new longship.

On November 20th, 2007, Ellie bought her first cat, and named him Skye, after her cat she had to leave behind with a friend in real life. Skye now follows Ellie around, while Alex roams her shack.

On November 28th, 2007, Ellie bought her second cat, also named after a real life pet she had to leave with friends. She wanted to make him white with black markings, but couldn't figure out how to do it, so he's white with tan markings. His name is Neptune, and he lives on The Hard-Headed Barbel with Korben. They love to play together.

Ellie's internet was down between December 2007 and January 16th, 2008. Upon getting it back, she bought Yar, her final cat, also named after a pet she had to leave with friends. Yar lives in Ellie's shack with Alex, who she loves to play with.

On January 26th, 2008, Ellie left Wolf's Dragoons, and started her own crew, The Flipside Pirates. She worked very hard to recruit new members into her crew, along with her first mate, Cludo, and her other senior officer and best friend, Ihavenobeard. Her crew joined Morgan's Marauders, and she hoped her crew would become a very great one.

Her crew helped her save PoE to buy a longship. The Magnificent Hammerhead, which was built on Delta Island at Whitestar, a shop owned by one of Ellie's flag members and former captain, Wheels, was finished and delivered on February 16th, 2008. It is docked Oyster Island with her sloop.

Ellie started going to college, however, and no longer had time to be captain of her crew. So she merged her crew back in with Wolf's Dragoons, her old crew. But it was a good crew while it lasted.

Ellieneo's a commander in the Oyster Island Navy. She is a grand-master bilger, and holds an incredible bilger trophy. She is also a respected sailor, holds the incredible sailor trophy, and is an ocean-wide distinguished swordfighter. Her blacksmithing standing is distinguished, and she also has the incredible blacksmithing trophy. She has also memorized all of the Diamond Archipelago. She continues to work on her stats and hopes to master many skills.

Ellie's favorite sword is her red and white short sword.

Ellie is most comfortable using the rope coils when rumbling.