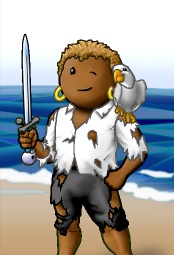 Dragunov can be found on Midnight, Cobalt, Hunter, Sage, Viridian, and Opal.

One stormy night in August, Dragunov washed ashore on Turtle Island. Lost and confused, he viewed his surroundings. He saw an inn, The Silver Dog. It looked like a rough joint, but he needed a drink and some information, so he wandered in.

Inside the inn, people were brawling and Swordfighting each other without fear or concern. After being kicked around a little, and unable to make his way to the bar, Dragunov slumped in the corner, defeated. He wondered how he could ever keep up with these skilled fighters, and earn the respect of them.

Just then, a mean looking pirate named Jakington walked up to him. He claimed he could teach Dragunov all the secrets of the sword, and that he could become the greatest swordfighter of all time. Without hesitation, Dragunov began his training. After countless hours of practice, and countless gallons of sweat and blood, he mastered the falchion and skull dagger, slashing his way through the ocean.

It was almost a year before Dragunov came across a tournament on an evil island known as Alpha Island. A horrid man (they called him Apollo) was holding up a pink octopus, and declaring that the winner of the tournament would get to dine on her tasty little body. Dragunov entered, knowing he was the only one who could save the poor creature. After slaying his last opponent with ease, he held up the octopus and declared it his own.

With his skills alone, Dragunov traveled to other oceans, making new friends along the way, such as Fonshizzle of Cobalt, Elayne of Indigo, and Cabinnaw of Viridian. Upon coming ashore on Kirin Island on Cobalt, a parrot landed on his shoulder. He told Dragunov that his name was Ra, because he was colored like the sun. They've been traveling together ever since. Today he can be found sitting lazily in the inn, rarely going on a ship for anything less than a sinking blockade.

Note: Dragunov's maroon/yellow parrot, Ra, was obtained by trading his two monkeys, which were won on Cobalt.