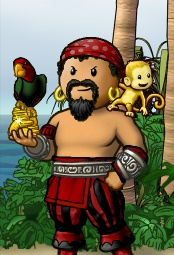 Darkviper is more commonly known as DV, by friends and enemies alike.

DV is just one of a dying breed, otherwise known as Beta testers. He was once joined, in his crew, by several other beta testers Salmon, Smiler and Seasnake. Having been a beta tester, he has seen many things come and go: pirates, puzzles, and updates to name but a few. Although some of the crew members fled to seek higher gains in other crews, Darkviper doing so also.

He started out on Azure under a different name, but alas! This pirate was lost to Davey Jones shortly after the unveiling of the Midnight Ocean. Back when DV was a 'Midnighter' he owned and ran a shipyard, along with Smiler. This was based on Turtle Island. He made a lot of PoE from building ships at very low prices, beating most if not all the other retailers on the island.

Darkviper can be found on every ocean, but he is primarily based on Cobalt now, and can be normally found swordfighting, hidden away in his lair on Kirin Island. At one time he was ranked second in the ocean for swordfighting; this was back in 2005. He has since lost his amazing skills, and is normally between 30th and 10th these days.

DV is not a massively wealthy pirate anymore, but he gets by. He purchases very little unless it is essential. Although he can be generous, you have to catch him on a good day. He has lost out greatly in the past through trusting other pirates who he thought were good mates until they robbed him of all his worldly goods. DV gave one pirate 350,000PoE to bid on a familiar for him while he was away on holiday in Ibiza. Unfortunately the Pirate spent the PoE and lost some on the brawling tables. This happened in the summer of 2005, and still to this day he has had no return on it.

Darkviper is currently an active avatar maker, and piratey artist on on the Y!PP Forums. His avatar thread can be found here. He has been a winner, and runner up in many art contests which have taken place for Y!PP.

Darkviper created a newspaper front page, showing an OM or developer in a compromizing situation

Darkviper created a monkey from a binbag, a balloon and a cola bottle. His entry got an hournable mention in the top 20 people who didn't quite make the top 10.

This was a competition run by the Ocean Master Apollo in which Pirates were requested to create design for T-shirts, that would later be sold by Three Rings. All entries were posted on the wiki here There were over 500 entries for this competition, Darkviper had two of his three entries make it to the Semifinals, of which there were twenty.

To the surprise of Darkviper 'Crabs in the Bilge' actually made it to the semi-finals, as it was submitted for a laugh.
Later to his surprise he found out that the phrase "I have crabs in my bilge water" was actually a phrase that was generated by the Y!PP filter. Please note this was not intentional

For being a semifinalist twice, Darkviper has been awarded two Daisy trinkets.

Another venture into another Video Competition, to create Spoof Puzzle Pirate adverts, here are the current ones:

Here are some relevant links to do with this project:

In the past, DV was involved in more pirate artwork. Although the Y!PP Forums held weekly art competitions, there were not any prizes for the so-called winners. Most of the final/completed pieces were added to the fan art page of PuzzlePirates.com, which is now hosted on the YPPedia.

Details across the Oceans