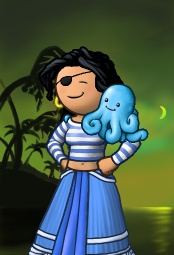 Cecidrake is a senior officer and damsel of the crew The Lost Lot and a member of the flag The Sewing Circle on the Emerald Ocean, formerly of the Sage Ocean.

Cecidrake started playing on the Viridian side of Meridian Ocean on August 2005. Shortly after she moved to the Sage side of Emerald Ocean where she quickly joined the crew Headless Doubloon. There she began her pirate career. Later on, Headless Doubloon was renamed Power of Moonlight and Cecidrake became Senior Officer.

In March 2007, Morbid Dreams was merged into the The Lost Lot. Cecidrake became a senior officer in her new crew.

Cecidrake is the owner of the following renamed vessels: