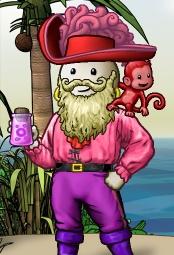 Bullettime is a pirate on the Hunter Ocean. He also controls the pirate Bullettime on all other oceans.

Bullettime has been a member of Odin's Demise for the entirety of his post-green pirate career. He slowly ascended the ranks, eventually attaining senior officer in the crew. He is currently a fleet officer, due to his relative inactivity. He also maintains titled status in The Eye.

Early in his career, he earned several hundred thousand PoE in poker, prompting him to open his first stall, an apothecary, on Quetzal Island. Shortly thereafter, he lost nearly all of his money, also in poker, and subsisted on the profits from the stall and occasional pillages. During this time, he began to regularly participate in Rumble tournaments as a means of earning spare change.

Months later, he had earned enough to rejoin the poker tables, earning enough money open two more stalls, a weavery on Aimuari Island and a shipyard on Quetzal Island. He also manages Dressed to Kill on Aimuari Island.

He is a regular presence on the forums, especially in writing events. Glaucus's Poetryck or Treat event was his introduction both to events and to the forums. Bullettime's forum account is FallenTree, and he has steadfastly refused to use an avatar. His signature contains little besides his name and ocean for convenience in events and sales.

Shortly before Booty or No Booty went into hiatus, Bullettime had begun to attend it regularly on his and other oceans. In his one time on the hot seat, he paid 120k for a slatted crate (it was a 50-50 with the other box holding 500k). He has won several items in surPRIZEs, most notably a gold starfish on Midnight and a rare maroon crate o' spices (since sold) on Viridian.

After some financial setbacks unrelated to poker, he closed the apothecary and weavery, and placed nearly all his possessions up for sale. He also opened up Bullettime's Blurb Bazaar, a "writing shoppe" on the Mariner's Muse, although he had planned to do so even before his financial difficulties. In September of 2007, he retired from the game, gave away nearly all his possessions, and let the Blurb Bazaar die off, but remained active on the forums. In March of 2008, he took steps toward returning to the game, winning the Hunter Bakeoff Bonanza for bilging. His current status is uncertain; he has been playing regularly but is considering stepping back again. He has also resurrected the Blurb Bazaar.