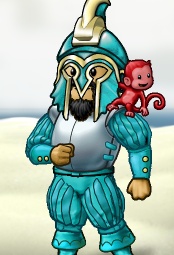 Av is currently a senior officer in the crew Stark Raving Mad and royalty of the flag Dark Asylum. He also plays under the name Avernus.

Av began his pirate life on the Midnight Ocean. He was a member of the Of Convenience flag and helped negotiate their takeover of Tinga Island. After the break up of Of Convenience, Av joined The Jolly Company but could mainly be found helping Robertdonald and the Scallywag Syndicate. Following Robertdonald's and Jacktheblack's banning, Av joined Imperio and helped organize the ill-fated attack on Spring Island. The attack occurred on a day Av could not log on, and Parthanos managed to sink a good portion of his ships. Following this disaster, Av decided to move to Cobalt Ocean.

When Cobalt Ocean first opened, Av joined Hydrophobia and remained in that flag when he returned. Av quickly made a name for himself as a blockade navigator after successful showings at Corona I, Viridis I, and Terra I. Av established himself as a sloop pillager and maintained close ties with the flag Valor as it was made up of a good portion of people from his old Midnight flag, Of Convenience. Av helped Hydrophobia crush No Quarter Given's attack on Olive Island and played a significant role in the Harmattan I and Tigerleaf I blockades. Av also helped Song For the Deaf win at Dendrite II and Harmatten II. After completing his stint as the event character Avernus, Av took control of Ansel Island with A Song For The Deaf. After the break up of Hydrophobia, Av join Dark Asylum where he and livngdedgirl continued to play significant roles in blockades across the ocean.