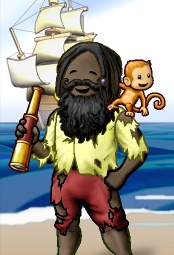 Looseweed is a pirate character role-played in the style of a "Midnight Rastafarian." He speaks entirely in the Patois dialect, although its parlance has been enhanced by widely accepted YPP phrases. ('glubbing,' etc.) Likewise, he has scrapped the less savory tenets of Rastafarian practice (drug use, hostility towards homosexuals) and adapted more "Midnight friendly" replacements, such as an addiction to piracy, and hostility toward stall keepers. Note that he does not reference the use of illegal drugs while role playing.

He first appeared as the captain of the crew Hell Fire for Hire, an Azure era PvP mercenary crew who signed on with Rudder Revolution during Pennsuedo's "War Month," but only truly developed into a "main" crew while in Notorious Fandango.

His notable contributions to the game are as follows:

Some speculation exists that the addition of dreadlocks (hair style) to the game may have been due to his contributions, but this will likely remain unconfirmed.

Looseweed retired from major ocean politics in October of 2005, and retired from all play except for blockade navigation in November of 2006. In early 2007, he co-founded the cross-ocean blockade training and execution project Purity of Essence, homed on Sage Ocean.

Looseweed is also one of the island designers. His design work can be seen at Accompong Island, on the Emerald and Opal oceans (as well as on the retired/merged Hunter ocean).