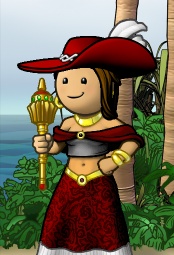 Tyria is a princess of Boo Our Other Booched and captain of the crew Fade to Black on the Viridian Ocean. She can usually be found on Conglin Island, which she is governor of.

Tyria started her piratey career sometime in the year 2007. She first joined the crew Alora 'en Shea, which means "Lady of the Sea". In December 2007, that crew merged with Fade to Black due to the males thinking that the name was too girly. No one knows how she became the current captain of Fade to Black, but it looks like she is there to stay.