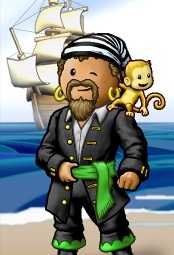 Zife is a pirate on the Midnight Ocean.

Zife started as a young greenie in late December 2003. He joined Seawolves Rugby, was promoted to officer and later demoted. He promptly left the crew and remained crewless and very inactive for a couple of weeks.

Zife came back to the game and joined his good friends Reeree and Sindaram in their new crew Moonlit Wake. He soon became a senior officer and stayed with the crew until December 22, 2005.

Moonlit Wake joined up with the flag Imperio when they took over Spring Island. During the Great Imperio-Avalon split, Moonlit Wake decided to go solo and created Moonlighting. Under Moonlighting, Zife took a very active part in the flag. He became prince and was appointed governor when the flag successfully blockaded Namath Island. When Zife left Moonlit Wake, he kept his governor position until a new governor (Mordrid) could take his spot.