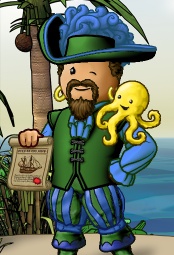 Mordrid, captain of the crew Moonlit Wake, led the flag Moonlighting as monarch as they reached 1st position in flag fame in July and were victorious in claiming Namath Island in a blockade.

He had to resign as monarch of Moonlighting due to real life issues in early September 2005, but passed on the monarchy to his father, Dreadful.

He is still a prince of Moonlighting and continues to play an active role in the running of the flag.

Mordrid is the governor of Namath Island, owned by Moonlighting.

He recently (Feb. 8th 2006) won a Gold Octopus from the Midnight Familiar Ship Auction run by Bia. He won with 365 points (62 Warbrigs 1 Galleon and 6 War Frigs). Mordrid also won a Blue/Blue Parrot, on April 25, in drinking during one of Bia's Long Shift Random Tournies. On July 6, 2006 he bought a peach monkey on Midnight named Mario (Renamed to Jack).