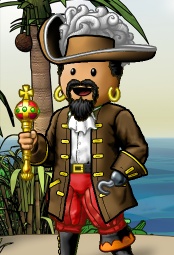 Vortar is the Captain for the crew Eternal Death Wish. He also occasional plays on the Cerulean, Emerald, Ice, and Opal Oceans.

Vortar joined the great ocean of Viridian sometime in mid-2006, and went through several crews until settling in the Last Sunrise where he rose up through the ranks to senior officer. Last Sunrise then merged with Great White Dugongs. Later on he was invited to take over as captain the flags blockade crew, Preatorian Guard, to make it a more active pillaging crew. Later on Captain of the Knight Stalker before retiring to a quiet island for a few years. Coming back out of retirement found myself in the crew Eternal Death Wish of the flag Dark Shadow Knights