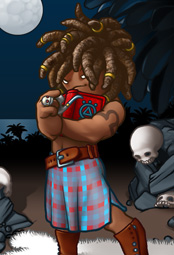 As part of 2008 Halloween events, Vargas made his first appearance in-game. Hints were given in a form of riddle on various nights which was related to him. Not only that, he left a statue of himself during the Masquerade Ball event, which then leads to the introduction of Cursed Isles.

He leads the cultists in the Cursed Isles and occasionally appears there for rumble fights.

Those found in dereliction of these duties will be forced to spin until they come to their senses.