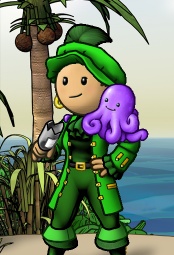 Fava was the winner of the Who wants to be Governor of Lima Contest (Cobalt), held by Avernus after he conquered Lima Island. The contest sought plans to rule the island, the best of which was awarded governorship of Lima for three months during the summer of 2006. As special event characters she and her closest helpers have white names. Through the entire three months of the event governorship, no one discovered the identity of Fava's alter-ego, nor the main pirate of any of her helpers.

Originally a member of Hades' crew Death's Gate, Fava left with her bean helpers to form the Pod People after a supposed act of spying by one of Avernus' demons[1].

Fava didn't run her events alone[2]. She had a large cast of bean helpers, played by mates from Flocktarts, the Hunter Ocean crew of her alter-ego Polly.

A New Can of Beans
Rename non-bean-themed bazaars, and propose names for the new shops and housing.

The Musical Fruit
Compose lyrics to a piratey drinking song to win the right to build a distillery shop.

Magic Beans, Tall Tales
Write a story of no more than 1000 words to win the right to build a weavery.

A Punch in the Kidneys
A series of rumbling tournaments each using a different bludgeon. Contestants accumulate points over time to win a purple octopus. The octopus was won by Pyralis, who named it Punch in honor of the event.

Chilly Beans
Sell building supplies to the estate agent over a period of 2-3 weeks to earn points. Most points wins rights to build a furnisher.

The Nina, the Pinto, and the Santa Maria
A solo sloop race from Sakejima Island to Lima Island, where contestants are attacked in sinking battles along the way. First place wins rights to build a shipyard.

Spill the Beans
Five bean-named sloops manned by solo Beanheads will set sail from Lima. Contestants sail solo and PvP the Beanheads. First to land a shot wins the battle, first to defeat all five ships wins rights to build an apothecary.

Fava Has Been Kidnapped!
Hades has kidnapped Fava! Follow clues to find her and rescue her from the underworld.

Pirate Paparazzi
A forum-based art contest in which contestants created a cover for a YPP tabloid, including a headline featuring one or more of the Ringers