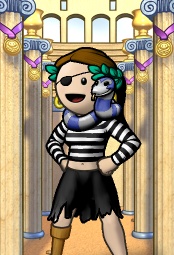 Hedvvig is a senior officer and roustabout of the crew Against All Odds, and a member of the flag Clandestine on the Hunter Ocean.

Hedvvig was introduced to the game by her sister in 2005. She quit playing when her free trial ran out, but soon came back on a new account. She was eventually convinced by her first crew to sub, and did so for a whole year. She played on the Midnight Ocean with her sister until the introduction of Hunter. She fell in love with the new ocean and has kept it her main ocean ever since. For most of her playing time, Hedvvig was a crew hopper and usually never pillaged. She was very fond of swordfighting, bilge, and hearts and did hardly anything else. After coming back from a year break though, she came back to find she was very fond of the pillage puzzles after all and had forgotten entirely how to swordfight well . She now focuses on trying to learn how to be ult in all the puzzles.

Hedvvig gets asked about her name quite a bit. The double v is simply because on the Midnight Ocean at the time of her pirate creation, the name Hedwig was taken. She really liked the name from a movie she had seen( Hedwig and the Angry Inch) and decided to use the double v so she could still have it. Her name is often confused with the owl Hedwig in the Harry Potter movies, misspelled, and generally confuses most pirates.

Hedvvig is also known for her artistic abilities, which she says would have never improved without puzzle pirates. She stumbled onto the forums 3 months after subscribing, just in time to find an art competition. She lost and has been entering as many Puzzle Pirates art competitions as she is allowed by time, hoping one day to win one that has a familiar as a prize.

She also plays under the names Hedwig and Shlee on many of the doubloon oceans. Including Jade and Opal.