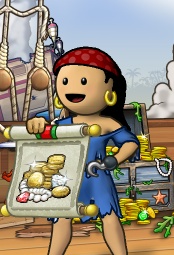 Piriri is a Puzzle Pirate from the Sage Ocean.

Piriri who was referred by Puwa started her life as pirate in October, 2007. She tried to name herself Piri but that name was already taken by someone else.[1]  During several hours since she came into Sage Ocean, Piriri had tried to everythings that came her way. Everything were newest and excited her.

When she was greenie yet, she was recruited from Galder who was senior officer of the crew Shanghaied. Piriri joined full member of the crew. A week later, Piriri became to an officer by promotion policy of the crew. Though members of the crew helped Piriri kindly, Piriri could not learn many things by them because Piriri was really poor in English. Sometimes Puwa let her know about Puzzle Pirates. But when Piriri asked Puwa, he didn't answer as much as Piriri wants, just as much as Piriri needs. Piriri had to study by herself how to play well and so on.

During the second half of 2008, Piriri had moved to another ocean. In December 2008, Shanghaied was merged with The Mad Tea Party. Piriri came back as an officer of her new crew in early of 2009.

Like independent pirates, Piriri acts as jobber in whole of ocean many time. However she never joins full member of the other crews. Piriri can usually be found pillaging the seas of Sage Ocean with Puwa. If she is not pillaging, she is usually in Atlantis, Haunted Seas, or at the Cursed Isles. She enjoys playing Parlor games and the Imperial outpost only when she needs to play in order to get the Seals o' Piracy trophies. Sometimes, she enter in the forum contests.

Piriri does not speak a lot. She is not able to understand English enough. She knows only few simple words, for example "Ahoy","Thank ye", and station names of Duty Puzzles. Because she can not understand what people talk, saying "yes" or "no" is difficult for her many time. Also she reads/writes with help of three or more on/offline dictionaries. If she actually needs help then she ask Puwa without fail.

Piriri likes to share other people with knowledge. She is glad when she feels that she grow up. e.g. she get the answer of her questions, understand new matters, memorize new things.

She likes freedom and she feels that her current crew value their freedom.

Below are Piriri's memorial days when she got interesting prizes or made a little contribution.

Piriri doesn't collect trinkets but she has a few prized trinkets, and is quite proud of them. Piriri's trinket collection can be viewed below.

Piriri designed a in-game furniture and was awarded a Greenbones doll. It is Piriri's first doll and was delivered on 26 Aug 2010 by Sun. Piriri also was awarded a purple daisy, for her entry in the Nemesis needs a new avatar!.

Piriri made a piñata and a greeting card for Jade Ocean's first anniversary, and gave Jade them. Piriri enjoyed Jade's birthday party heartfully.

Doodle is one of the Piriri's favorite. She started post her artworks to the forum contests since 2010, and has been making little contributions in this field.

Below are in-game trinkets designed by Piriri. She made these designs on August 2010. On 31 August 2010 these were both chosen as the winning designs, and on 22 September 2010 it was released on the production oceans. They are available in all the colors of the Autumn II trinket palette. At first, they had no graphics in the palace shoppe. It was fixed quickly without a release note.

Below are the commissioned avatars and the winning avatars on the forum contests, both made by Piriri. Anyone can see some of them in the forum. Piriri doesn't have any avatar shoppe. However a few times she receive private messages for request and make avatars. A more extensive collection can be viewed in an Avatar artists category.

Below are some of Piriri's rendered easter egg designs and their skins. They got prize in the People's Choice Easter Eggs! 2010. A more designs made by her for Design Egg Furniture for the Game 2010 can be viewed in lists of rendered entries and flat entries.

Some of the avatars used by Piriri on the forums can be viewed below. The first two avatars are made for Puwa but Piriri believes she can use them. The other avatars were given to Piriri for her prizes. A more extensive collection can be viewed in an Avatar art category.