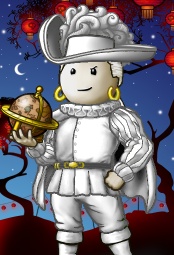 Lorn is captain of the crew Formido Silentium, and a citizen of Endurance Island. Lorn can often be found pillaging across the Midnight Ocean, or working in his various stalls on Hephaestus' Forge and Endurance Island. He enjoys talking to hearties and hunting skellies and zombies given the opportunity. Lorn is also a collector of white trinkets, weapons, furniture and miscellanea.

Lorn washed ashore on Beta Island on 14 July 2006, though he did not become an active participant on the ocean for some time thereafter. Little is known or remembered of this early period, save that he was part of the crew Drastic Measures, then flying the flag of Sans Dramatica.

During the winter of 2006 a disagreement between he and several of his fellow senior officers led to his leaving Sans Dramatica. He founded his first, short-lived crew shortly thereafter, followed by a second, One Above Fucus, in December 2006.

Beginning in April of 2007 Lorn took a hiatus from pirating for more than a year. He returned in November 2008.

Lorn quickly became a Senior Officer in The Scorpion's Sting, largest crew in the flag Nova Scorpius, where he practiced his pirating skills and learned of the many changes that Midnight had undergone in his absence. It was during this period, on 23 January 2009, that Lorn lost his leg when the vessel he was jobbing on was sunk in the Cursed Isles.

Lorn left The Scorpion's Sting on 27 January 2009, keeping good relations with his former flaggies, to start the crew Formido Silentium.

Lorn became a founding member of Reckless Abandon OCL on 24 March 2009. He served as captain and bnavver of the crew throughout the Olympic Champions League (OCL) sea battle competition, Season 7, under the psuedonym "Ghul." Reckless Abandon tied for fourth place in division two with four victories and three defeats. The team he assembled for this adventure was comprised of Laralai, Peteypirate, Oppy, Bootyboo and Ukchick. For this accomplishment Lorn not only recieved a Cleaver egg but a renamed longship, Olympic Pickerel. Later in the year Lorn, together with Cadavereye, Laralai, Oppy and Darkerik, formed FOFU for the OCL rumble competition. Once again they took fourth place in the competition.

Laralai, First Mate of Formido Silentium, became Lorn's wife on 26 April 2009. They were married by Bauds at Lukos' Estate on Epsilon Island. Standing as his Best Maid was his long-time friend Ukchick, and Ldeath served as a groomsman.

On August 25, 2009 Lorn was able to realize a long-standing ambition. After nearly three years of hunting her, Lorn defeated The Window Queen one league off Wrasse Island. His long-time nemesis, The Widow Queen proved to be his first victory over a brigand king, and set the stage for the next step in his career as a battle navigator, an attack on a flotilla.

While visiting the Unnatural Redoubt of Horror north of Namath Island Lorn found the serpent Jormungandr[1], his first Familiar. He purchased his second, the white monkey Kobe, from Cornflaxes on 19 September 2009, which he renamed to Bean Sidhe[2] in January of the following year.

On 23 September 2009 Lorn achieved another long-term goal, seein his name appear on the top ten list of bnavers on Midnight.

Lorn was awarded his first Ultimate trophy for Treasure Haul on 1 October 2009.

The Eclipse is owned by Ennoia, one of Lorn's alts.