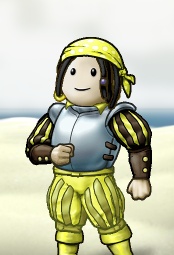 Bauds washed up on the Midnight Ocean around October 2007 after encouragement from real life friend Revelloscum. Over time, he developed a love for almost all puzzles (a few he hasn't really tried yet) and has done his best to excel in them. After Revelloscum lost interest in the game for a while Bauds took over as captain of Scupper Me Booty and king of Rodger Me Hearty, positions he has held since, working towards achieving flag goals including blockading islands as well as personal goals such as more ultimate trophies and more number one trophies.

After around 3 years of being a landlubber, Bauds ended up on Obsidian Ocean in the crew Outbreak as an officer. After quickly working his way up through the ranks to senior officer while training dozens of pirates up to officer rank, he decided he wanted to be part of a blockading flag, so made his own crew, Blood and Thunder, and rejoined his other friends in Consider It Sunk. While there he has often been a part of a the navigation team in blockades, for a flag that has the best win ratio on the ocean despite being the only one to mostly have never worked together previously. He was promoted to royal and is proud to be part of a flag that has been so successful and full of great, kind people.

Bauds is a keen forum poster who does his best to contribute to game design, help players when he can, and contribute to parley discussion.