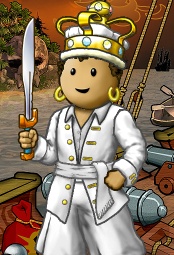 Liquidsilver is a pirate on the Obsidian and Emerald Oceans, formerly of the Sage Ocean.

Liquidsilver started playing YPP on the 12th of July 2006, after being continously told to by his friends Whizblade and Pinkpiglet.

He went straight into the crew the crusaders which seemed sensible as this was where all his friends were based, and within 2 weeks he had reached the rank of officer. Not long after he reached the rank of senior officer and became a lord of the flag, The Kingdom Of Sage.

Then one afternoon in August, Liquidsilver logged on to find Pinkpiglet had suddenly left the crew. After contacting her and discussing what was going to happen they decided to create a new crew, which Liquidsilver donated a large amount to. Thus, Liquidsilver left the crusaders and became senior officer and co-captain of The Pink Pillagers of Sage.

The crew joined the flag Tide of Terror for a few weeks before becoming established. Then Liquidsilver donated all the money needed to start a new flag and became king of the The Scottish Flag.

In late October/early November, The Scottish Flag disbanded and the Pink Pillagers of Sage rejoined Tide of Terror where Liquidsilver became prince of the flag. In late Novemeber, The Pink Pillagers of Sage merged with the crew Fearless Phoenix where Liquidsilver became a senior officer, swordsman of the crew and prince of Tide of Terror..

In April 2007 Liquidsilver left Fearless Phoenix to help his hearty's crew. He then left to join Fallen Angels as a senior officer when he heard Pinkpiglet had used her alt, Vikki, to resurrect it.

In May 2007 Vikki transfered the captaincy to Liquidsilver, who then joined Fallen Angels to Tide Of Terror, in which he became a prince.

Then after stints in other crews he settled in the missionaries (captained by a good friend) where he met the most amazing person in the world, Kitasha (or at least, he thinks she's amazing)