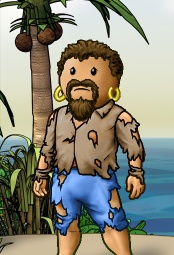 Gothmog, the self-declared "King of Cobalt" and popular forumtart, can often be found on the aforementioned blue ocean.

His name is taken from J.R.R. Tolkein's The Silmarillion. Gothmog is neither a goth nor a mog.

Gothmog found Puzzle Pirates in February of 2004 through Penny Arcade. He joined up with Shockefrog in A Cutlass Above the Rest. Due to inactivity, he joined up with another crew for a short while. After joining another crew, Frozen Ray for a month, he decided to create his own crew, The Shadowy Balrogs, eventually forming the flag Allied Foundation and attempting to take Beta Island. After Beta, TSB split from Allied Foundation, and stayed independent for a few months. He then joined Avalon.

When Cobalt Ocean opened, he left and recreated The Shadowy Balrogs there, creating the flag Bloody Hell with Wlada. Due to flag inactivity, he joined Indestructible Fury. While in IF, he became governor of Prolix Purlieu. After some time, TSB became inactive. Gothmog became active in the game again, and formed Anonymity, and eventually took Viridis Island. After a period of low inactivity, he has restarted TSB with many of his original mates, and now helps run Oceanus Expeditus with Morbuzaan and Hutch.