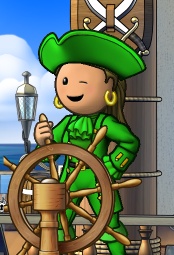 Gail plays mainly on the Sage Ocean. As of 6 January 2007, She is fleet officer in the crew Ticklers of the flag Tea and Strumpets.

Gail began playing Puzzle Pirates in September 2005, directed by an advertisement link on Popcap. Spawned on Sage, she remained crewless for a major portion of her piracy career, and spent more time than most pirates puzzling in the navy. She finally joined the crew GODS OF THUNDER in December 2005, and Joined Dark Storm Pirates after GODS OF THUNDER disbanded in April 2006. (The crew later merged into Ticklers.) Many know her as the probability-calculating pirate lass in Sage episodes of Booty or No Booty.