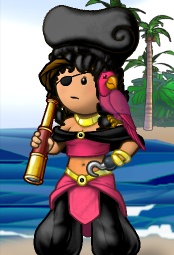 Taco, alternatively known by her forum name Shandra, is captain of the crew Calendar of Events on the Midnight Ocean. She is known for the numerous events she has organized; her parrot Peaches was in fact won in Event E2, for her winning Food Fight event. She won her second familiar, a tan/black parrot she named Brownie, on the 21st of October for her entry in the Dead Letter Office creative contest. On the 22nd she traded familiars with Heksubah and is now the owner of a tan octopus named Henry Von Giblets. Henry has taken up permanent residence on the shoulder of Blarnybill as a gift from Taco. Taco is proud to be responsible for the addition of the Cleaver, Nemo, Lizthegrey, Arcturus, Cephalopod, and Roparzh doll trinkets to the game.

Currently retired although spotted occasionally at the Inn on Alpha Island.