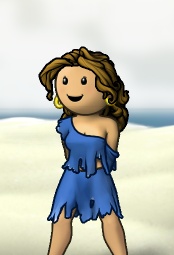 Elleana first washed ashore on the ocean of Midnight under the name Elizabethswn in the early days of 2006, living on the island of Epsilon. After spending several moons there, she sailed to the Sage Ocean in 2007, intent to raise her station. However, she continues to maintain her former name, and can occasionally be found wandering around Epsilon and the neighbouring islands, or their various inns.

She currently holds the rank of captain and the title of diplomat in the Emerald Ocean crew Whimsy and Caprice. Her flagship is the Mark I sloop Nightingale's Bane.

Since piratical infancy- minus a short stay on Wensleydale- Elleana has made her home on Admiral Island, living in every dwelling from shack to townhouse. However, upon joining the Perilous Puppets in 2012, she and her rodent companion, Odis Moriarty (affectionately known as Odie), moved to the Stork Archipelago for a time, affording them greater proximity to the crew's epicentre on Bowditch.

Elleana devotes most of her time to Kraken slaying, preferring its intricate dance of subtle moves to the start/stop of SMH, and has even been known to mount attacks unassisted, focusing her attention on ink and cuttle boxes. In lieu of swashbuckling adventures, Ell spends her spare time carousing at Admiral's infamous inn, Sho Girls, and can usually be found by the poker table. In the past, she was also known to make many an appearance at those more intimate gatherings such as auctions, weddings, or the classic estate party.

In Autumn 2015, Ell and Odie moved back to Admiral. As of Christmas 2017, they can still be reached at their sumptuously decorated home in the Caddyshack tenements.

Following a sabbatical from the game which started in mid-2010 and lasted nearly a year, Elleana returned to the ocean of Sage in 2011 to once again wreak havoc. Although she hoped to bring The Nereids into glory and distance herself from the defunct flag, Brigand King Empire, it was not to be. This resulted in yet another disappearance.