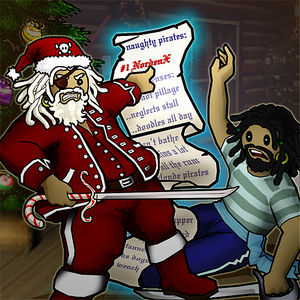 The December Daily Doodles is a popular event which takes place throughout the duration of December, usually run by the Ocean Master Apollo. It has been run annually since 2005. This event is similar to the Spring Egguinox event.

Every weekday, a creative contest is posted. Most of these contests are forum-based and require entries the same day. 24 hours after one contest opens, it will close and the next contest will be announced. There are usually a variety of prizes during the month and they are not pre-announced.

There are multiple forum threads for this event. The main game thread contains a running summary of events, winners and prizes. Each week of Doodles then has its own entry thread.

There are also weekend events, which are posted separately.

One weekday per week will be a tournament day. The top prize in each is a colored familiar. The tournament day, type and time should be announced at the beginning of each week.

In 2012, the format changed due to time constraints, with events instead being run twice a week. Events are posted each Saturday and Tuesday, and run for 3-4 days each.

2013 continued the Not-Daily format, with challenges being posted on Sundays and Wednesdays.

2014 continued the Not-Daily format, with challenges being posted on Mondays and Thursdays. Clotho took over for Apollo.

The twice-weekly format was used again, with challenges being posted on Tuesdays and Thursdays. Clotho, Hera, and Nemesis ran the events. (Due to a scheduling booch, the 2017 doodles actually took place in January 2018.)

The general rules for the forum contests are as follows.