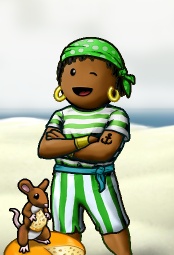 Daxy who is a multi-ocean pirate and has hoped from the Viridian Ocean as Daxyy, the Crimson Ocean, the Hunter Ocean and the Sage Ocean as Daxy. Which was after he resided on the Malachite Ocean from December 29, 2008 to June of 2009 after his old pirate on the Sage Ocean was deleted.

Daxy achieved fourth place in a Foraging competition in February of 2009.

From the competition he got a hearts table.

From the competition he got a Gold/White/White Sloop.

Daxyy achieved 1st place in a Shipwrightery and 3rd place in a Foraging competition on August 2nd, 2012.

When Daxy first landed in the middle of the malachite ocean he joined the crew Skulls and Cross Bones that was led by Mrbones . Daxy eventually left that crew and joined Poison Ivvy that was headed by Lanshire. He was a senior officer in the crew until he left and it was taken over by Evvy .

After Lanshire left Daxy left to search for a new and better crew and he finally found Lkeddie who had just started a crew and had about four people in it so he joined The Legion. When Daxy joined he was immediately made a senior officer.

Later after the King of the flag Vannaka left, Vannaka's crew left also so The Legion was the only crew left in the flag. Eventually Lkeddie became the king of El Pollo Diablo and he made Daxy a prince of the flag along with Doulber, Daxy's best friend on Malachite, who joined after Daxy and used his trust to float up to the higher parts of the crew and flag.

The crew was growing a lot more and it had been on Malachite's crew fame list often. The goal of the crew was to be #1. The flag had two more crews in it and a couple of alliances. It was going to get a lot more involved, so other flags would have to watch out for it.

However the crew left the old flag and joined the #1 flag on the ocean, Ball N Chain, whose king at the time was Beatthebrats.

Eventually the crew finally disbanded and Daxy went out to find another crew. Later his friend Mrjsparrow invited Daxy to join his crew of Heaven and Earth which was the lead crew in the flag he was in before.

Daxy landed in another ocean and had no where to go. The next day he saw someone, Extrodinary, from Malachite and he joined her crew Pheonix Rising, starting out as an officer. Later he bought a sloop the Rude Hagfish and was promoted to senior officer throughout time. He helped add lots of people to his crew including his great friend Deathbeardt. His crew also created the flag Rising Pheonix which gained 500 members in 5 days after being started.

Later the crew decided to break up to make the game more fun for everyone in one crew. He left the crew and with a friend, Pachy, started the crew Die By The Sword. They also started the flag Post Mortem which Daxy is the king of.

When Daxy came back to the Crimson Ocean he decided since his crew had shrunk while he was gone and that Pachy probably wouldn't be back until the summer again, he made himself captain of the crew but only temporarily till Pachy came back. Daxy finally painted his sloop the Rude Hagfish lime and white and he thinks it looks very great and it's the beginning of very grand fleet.

While being captain Daxy has added more crews to the flag and has helped the flag get up to illustrious fame with the help of Drakus and the Relentless Winds who joined the flag and has helped it turn out to be great. Daxy bought a merchant brig and named it the Maroon Tautog. He asked Odan for his apothecary stall since Odan was closing all his stalls and started the production of maroon and black paint to eventually paint the ship when he gets enough paint.

A couple of weeks later while waiting on more paint Daxy decided he wanted another ship added so he purchased a longship now along with painting the maroon tautog he is also painting the longship.

Daxy first hopped ship on the Hunter Ocean to help out different flags with blockades and different crews with Sea Monster Hunt's eventually Daxy went to a flotilla with Knott Serious which was led by Knottydog and he ended up liking the crew so much that he ended up joining it so now he is with Knottydog and Dawnrenee, the queen of the flag Against The Current.

After being in Knott Serious for a couple of months Dawnrenee decided to start her own crew but still be queen of the flag so she ended up taking over FRIG IT which was the old blockading crew of the flag. Daxy decided to follow her to the new crew and became a Fleet Oficer when he joined.

After staying in frig it for a while daxy was promted to senior officer. About a week after becomming a senior officer he bought a junk which he ended up painting blue and navy. On August 1st, 2010 his flag decided to try to earn Ilha da Aguia from the event cade by Natural Disaster but lost by a few points in the last round.

Daxy is the owner of the following renamed and painted vessels:

Daxyy is a pirate on the Viridian Ocean. This is the ocean where Daxy moved to after his crew on Malachite left. There was an existing pirate named Daxy on Viridian, so Daxyy was the name chosen as an alternative.

Daxyy joined the crew The Merry Loons in the flag Soul Mates.