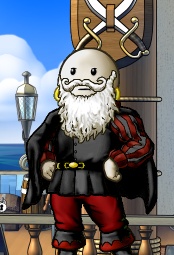 This page is protected because it is linked to in-game from the Charun memorial on Sakejima Island, Viridian Ocean. To suggest changes, please use Talk:Charun.

Charun is a special event character created as part of the Who Wants to be Hades' Governor Contest. He is controlled by a Puzzle Pirates' player who submitted the contest's winning plan for Sakejima Island on Viridian. He is a Fleet Officer in Death's Gate and a Lord in Death's Banner. Like his master Hades, Charun does not speak to Mortals.

Charun has been seen as a skellie, an old man in rags, and dressed in a black/maroon cape around Sakejima Island. It is thought that in addition to not speaking to mortals he also does not leave Sakejima.

It has also been noted that he might have became hearties with some mortals, but only talk to them by actions.

Charun is the Etruscan equivalent of Charon, guardian of Hades in Greek mythology. In Etruscan mythology Charun is the demon of death that torments the souls of the deceased and guards the entrance to the underworld. His wields a large hammer which he uses in his duties in the underworld.

During his inauguration ceremony on 2005-11-13 Hades inadvertently chopped off Charun's head. To rectify the problem of having a dead Governor on Sakejima, Charun was resurrected as a skellie.

On 2006-01-15 Governor Charun hosted "Charun's Styx Ferry Race" across Viridian. This was a solo sloop race that began at Sakejima Island with the first leg being to Harmattan Island, the second being to Olive Island and the third back to Sakejima Island. 19 pirates entered the race with 14 completing the course. The winner completed the course in 89 minutes.

From 2006-02-01 through 2006-02-12 Governor Charun hosted "Charun's Ferry Repair Competition". This competition was to determined who could repair a sloop at full damage and full bilge the fastest. Participants were timed on how quickly they could eliminate all damage and then timed on how quickly they could empty the bilge. The two times were then combined to find an overall winner. 23 of Viridian's pirates competed in this contest to be known as Charun's personal Ferry Repairer.

On 2006-03-05 Governor Charun hosted "Charun's Styx Ferry War" at Sakejima Island. In this event blockade for sloops, registered pirates could compete for prizes by sinking all other sloops registered for the event. The blockade was open to all sloops whether registered or not. There were approximately 35 pirates registered for prizes with the following results.

In April of 2007, Charun return to host Plundered Poems 3:Dead Man's Chest as a forum contest open to pirates of all oceans. The contest drew entrants from Midnight, Viridian, Cobalt, Sage and Hunter. In total there were 74 valid entries submitted over the course of a 3 and a half week entry period with the following results.