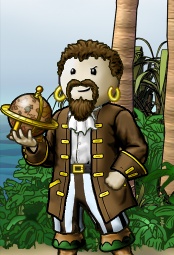 Bluefrog is a pirate on the Meridian Ocean, formerly of the Viridian Ocean. He is a fleet officer and cartographer of the crew Blue Flame Armada and a lord of the flag Pirates of the Blue.

Bluefrog was rescued from a deserted island around late July 2005. Learning the ways of the sea in the navy, he soon joined a crew where he quickly rose in the ranks. Bluefrog was taught the ways of an officer by a lass named Skateaway.

After saving PoE to purchase his first ship, the sloop Clueless Angler, Bluefrog started his own crew, the Viridian Explorer. This crew later merged into crew Original Syn which was the founding crew of the flag Synergy. Bluefrog got to serve as a prince for a moment when the queen needed to take a break. Synergy taking over Olive island in Jade archipelago, Bluefrog got to experience of being an owner of a shipbuilding bazaar, The joys of a merchant days were here.

When Synergy fell, most of the members joined ranks under the Original Syn captain at the time Reenie, but Bluefrog wanted to once more try as a captain. After having some restocking issues with few of his officers, Bluefrog soon disbanded his crew and joined after few detours the ranks of a merchantman, Stonewolf, serving as a mapper for the crew Caeruleus Rana Corbita. Life of a merchantman was good and soon Bluefrog hired another member called Pabulor from CRC to start a crew and get the fame up to start a flag which he would then join as the monarch.

Time passed and Pabulor, having trouble with his crew members stealing from his vessels, decided to give up as a captain and bestowed that rank to Blueforg. He joined the crew Pierites, naming it Rana's Privatees. The flag Pirates Revange that Pabulor managed to get before this change was renamed Caeruleus Rana. Bluefrog then continued his journeys as captain and king.