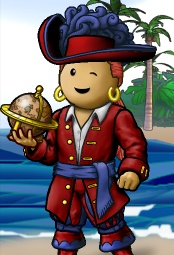 On Midnight he is currently an officer of the independent crew Soyokaze, and owns Callistan's Ironworking Stall on Tinga Island.

On Cobalt he is captain of Kogarashi, lord of Imperial Margarine, and manages Morpheusshad's Apothecary Stall on Lima Island and Weapons of Mast Destruction on Prolix Purlieu.

Callistan is an active contributor to the Wiki [2]. He spends most Forum time in Game Design.

His history on Midnight dates back to May of 2004, and includes time as senior officer and first mate of Soyakaze, in Dark Gods of Stormy Seas. Later Soyakaze formed the flag Honor Among Thieves, where Callistan was a lord. As more Honor Among Thieves pirates moved to the Cobalt Ocean, the flag merged with Crimes of Passion, where he retained his lord status. More recently, Soyokaze has gone independent, electing Callistan as captain.

Callistan started playing the Cobalt ocean as senior officer and first mate in Murakami Suigon, a crew formed by his Midnight captain Kuroshio and several other members. After joining the flag The YMCA and helping to colonize Viridis Island, Murakami changed their name to Kogarashi, and started the flag Winds of Change, electing Callistan captain and monarch.

Callistan is one of the winners of the Design the Oceans Contest.[3] His excellent design work can be seen at Stormy Fell, on the Cerulean and Meridian oceans (as well as on the retired/merged oceans of Cobalt, Crimson, and Viridian).

What is a great way to meet new people in game? According to Callistan, collecting ships! Since acquiring the Strange Plaice, he has sought to grow a small fleet of plaice named ships. All are "natural" names, meaning none were shanghaid. This provides yet another little game within the game, and a great way of meeting new pirates. Here is a list of his current plaices and who he acquired them from.