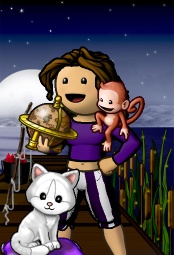 Budclare is a senior officer in the crew Poison Apples on the Obsidian Ocean.

Budclare began her piratey career on Midnight in September 2006. She joined the crew Sign of the Stars almost immediately, just because they asked. After being pestered for several months by her crewmates, she finally subscribed, only to realize that her crew was pretty well defunct and likely to stay that way.

After several months of essentially being a one-woman crew, she accepted an offer to join The Jazzie Crew, where she remained until moving to Malachite. She no longer remembers the name of her first Malachite crew, but does remember that it was a member of the flag Enigma. From there, she moved to Nefarious Miscreants, also originally part of Enigma. The Nefarious Miscreants have not been able to get rid of her to this day, not even by threatening to make her Queen of Infamous Rapscallions.

She refused to move to Emerald when Meridian started going belly-up, but by the time she escaped from Island Design Purgatory, Meridian was pretty much gone, which made the move to Obsidian a bit less painful. She still misses, among other things, her renamed ships, her pets, and her Kraken clock tea party.

She was a member of the Treasure Hunters Guild when it was active, as well as a sometimes participant in other forum events, including the Cursed Isle Challenge in which she was a runner-up. She is an avid Doodler, though she's only won Dedicated Doodler once (2011).

She has memmed all of Meridian and Obsidian, the Midnight-side of Cerulean, approximately two-thirds of Ice, and is now working on memming the Emerald Ocean inter-archipelago routes just because she finds Ye Known World maps with no memmed routes disorienting.