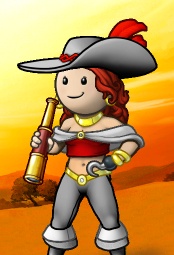 Sindaia is a Senior Officer of The Lost Lot and member of Candy Coated Chaos on the Sage Ocean.

Sindaia began her life as a pirate in August of 2005 on the Cobalt Ocean. During her brief stay within those waters, she joined the crews Lunar Eclipse and then Solar Eclipse of the flag Bad Moon Rising. It was thanks to the people within that flag that she learned the basics of piracy and decided to continue on with her career as a pirate. However, she soon came to realize that there was a price for that decision, which she could not pay. So, she packed her few belongings shortly afterwards, and made the journey towards greener waters, and her new home on Sage.

Sindaia then spent some time getting to know the crews on the new ocean, and even joined one. However, she quickly came to realize that many of the crews at that time were travellers from the Viridian Ocean. Then, on September 9th of 2005, she applied to a job posting for a war frigate pillage with The Lost Lot of the flag The Light Brigade. At the end of the successful pillage, Captain Tealbeard asked if anyone wanted to join the crew. After asking a few questions and learning that the crew was based solely in the Sage ocean, Sindaia decided to join.

After a few weeks with the crew, she was promoted to Officer, and then later successfully passed her Fleet Officer test. Shortly after her second promotion, the fates decided to intervene and prevented her from continuing on with her life as a pirate for some time. When she was finally able to return to piracy, she found that all of her previous skills and possessions were gone. So, she began to relearn her skills and once again found the crew that she had found a home within. Shortly after rejoining the crew, the current captain, Scarymuffin, re-promoted her to officer based upon her previous merits. A few months later, under the command of Captain Kathe, Sindaia was once again promoted to Fleet Officer to help train the less experienced members of the crew. Then, in August of 2006, following the successful Candy Coated Chaos blockade of Amity Island, because of her many contributions to the crew, particulary her work in training fellow crew mates, she was promoted to Senior Officer by Captain Korr.

Sindaia is one of the winners of the Fantasy Island Contest. Her wonderful design work can be seen at the following islands:

When the first people to step foot on the island found the ship embedded in the middle, they stepped back and debated on it for a time. The favorite tale amongst them was that the ship was a mighty and grand ship, captained by a foolish man who sailed 'er into the midst of a wicked storm of rocks. The ship stayed strong through most and would not sink, but the storm had to prove that it was stronger. So, the storm, realizing that it could not sink the ship, captured 'er instead, so she could not sail ever again. After many years, the captured ship slowly turned into the island that stands there today.