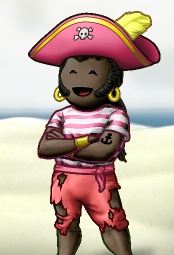 Qvintus is the first mate of Nightmare and lord of the prominent flag Vanguard.

Ekko was created as a way for Magnus to kill time while visiting the family of his wife, now known as Avienda. Magnus was unwillingly dragged into the world of Puzzle Pirates as a result of tetris being the only game on his laptop, and the cunning web laid out by his cousin in law, who played the pirate Arsozah.

Well dragged into the game, Ekko was told that he was on the wrong ocean and that Viridian was the only real ocean. So therefore, in the mists of Sakejima, Qvintus was born. The first pirate Qvintus ever spoke to was Heffalumpy (she was a greenie too back then) and Jimmydids (he hasn't changed much since then).