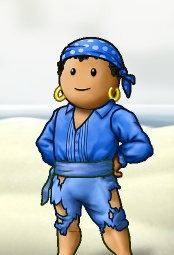 Ztirf is currently a fleet officer of the crew The Rising. He sails the Meridian Ocean.

Ztirf begin playing Puzzle Pirates back in December 2005, originally sailing the Viridian Ocean under the crew Mutiny. With the help of his first true captain, Warbaby, and senior officers Royco, Ltseppe, Thomie and Jexx; he learned every aspect of the game and made his way up from cabin person to officer.

Mutiny was a powerful crew, but problems arose within friends, and it was forced to split into two. Ztirf left to follow Warbaby and his new crew Scourges of the Seven Seas, where he kept his position as an officer and earned the title "carpenter". He kept following his captain until the day he quit.

After that, Ztirf joined many different crews including the crew Haven which consisted of several former Mutiny members. Not feeling the same connections as before, he eventually left and became an independent pirate.