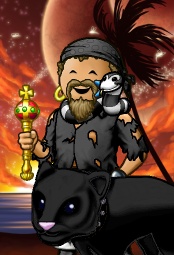 Zarchi is a pirate on the, Cerulean, Meridian, Emerald, and Ice Oceans, however he does play on the other oceans from time to time. He mainly is found on the Cerulean Ocean planning blockades, or running citadel runs in Atlantis.

Zarchi first joined Puzzle Pirates in late 2006. He arrived on the Cobalt Ocean and was never a well-known player or of much significance for many years in the Puzzle Pirates world, he often would quit the game, and return in short bursts for a few years. However, in late August, 2011. He began his journey, when he joined the Midnight Ocean with no stats, PoE, or hearties. He joined the crew Rated Arr now called Rated Yarr, led by Captain Xule. He immediately took a much larger interest in the game, working as hard as he could, to attempt to make a good impression on his captain and crew. In this crew, he met many great people and quickly made friends with most of them. He speedily was promoted to fleet officer rank, and began running many Cursed Isles trips and jobbing for tons of Atlantis runs. He continued to make friends, and became the fastest person to ever become Senior Officer in the crew. Once reaching this achievement, he was asked to navigate in the Luthien XI blockade. There, he proved his navigational skill and was recognized by a few other small flags, he was then asked to blockade in their blockades, which he very much enjoyed.

After about 3 months with Rated Arr, he moved into the crew, Skellie Tears, led by the captain, Vova. There he was immediately set as fleet officer and began to work with his new crew. He started to run citadel runs, and quickly improved at his navigating throughout Atlantis. He also continued working with Cursed Isles, and quickly gained hearties along the way. Afterwards he decided from the motivation of a hearty, to start collecting one of each trinket, and to collect one of each boat type, including the limited edition class ships. He now collects pretty much any limited edition item that he can get his hands on, and stores them all in his pockets, so they never age.

With nearly a year in the crew Skellie Tears, he decided that with the decreasing ocean populations, and Dies Irae's lack of activity, that he would start an alt flag alongside Fonshizzle, and Culliford. The three created the flag Universe A and blockaded Orca Island soon after. After this first step in the flag, they decided it was time to strike larger. They double dropped on both Beta Island and Olive Island, on August 25th, 2012. Both blockades were won and this opened the door to a new active flag, and force on the Cerulean Ocean. Zarchi then left Skellie Tears, and created a new crew, Empty Planet. Which he is the current captain of. He now plans to continue running this crew, and flag, to more blockading fun and adventure.