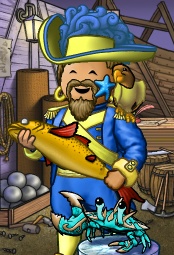 A short history of a smelly pirate

Yarrmate is rumored to own a certificate. This certificate states that he is, in fact, human. People have been known to debate whether it is real or not (the certificate, not Yarrmate), but what is very real is his smell, which supposedly has its own personality. Pirates are traditionally known to keep away from baths, but Yarrmate takes this to the next level - he will not even be in the same BUILDING as a bath!!

Yarrmate joined The Flying Dutchmen crew a few months in to his pirating career, and with the help of many of its senior members, progressed through the ranks to become senior officer. He was bestowed the title of boatswain. After the formation of The Flying Dutchmen flag, Yarrmate was made a prince. His role is basically that of an admiral of the navy - to try to organise flag events such as pillages and blockades.

In mid-November 2008, along with his equally smelly cohort Dreadopus, he helped to form Adventure Galley, and was given the role of first mate. When Dreadopus left the game temporarily, he stepped up to become Captain of the crew.

He is always up for a pillage, be it leading them or helping out crew and hearties, in fact pretty much anyone as long as he can work on his sailing!

At present, Yarrmate owns one stall, and is a manager in another two.

Owns Yarrmate's Distilling Stall on Tigerleaf Mountain. This has been open for business since November 20 2007. This stall is home to two of his other pets, a pig named Spider Pig and a rat named Tinkerbell.

Manager at Santhiago's Shipbuilding Stall on Prolix Purlieu. However, he likes to think that he runs it as his own! His black dog lives there, imaginatively named Dog.

Manager at Catzookie's Ironmongers Stall on Carmine. He cooks the books... um... keeps the books, while Catzookie slaves over the anvil.

Yarrmate's home is on Labyrinth Moors, where he owns a little cottage filled with junk. His dog Kujo lives there, as well as Smokey, a birthday cat! (Thanks Parura!!) He is also taking up the basement of Westwood's row house in Corinthian Condos, also on Labyrinth Moors.

Don't, whatever you do, ask about Yarrmate's Mum...