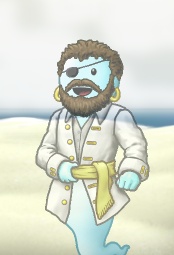 Snort is a senior officer of the crew Crossbones and a prince of the flag Elements of Fear on the Cobalt Ocean.

Snort is renowned across the ocean for his remarkable battle navigation skills, which are regularly put to use in pillages, resulting in arguably the most successful pillages in ocean history.

One of Snorts most well known roles in the ocean was his time in What The Falchion, playing a major part in their blockades.