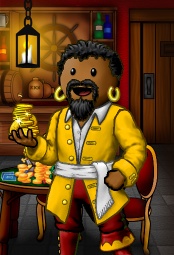 Xazer is a pirate on the Viridian Ocean. He currently lives in a manor on Dragon's Nest. He is an officer in the elite crew Nightmare, of the flag Legacy.

Xazer found Puzzle Pirates the 1st of April, 2006, and soon managed to convince his friend Dyrbar to join as well. After a confusing first week, he joined the crew Booty Snatchers where he stayed for a couple of months. However, as he was unable to reach the rank of officer in the crew, he left and joined Aesthete's Foot, where he got a taste of officer life for the first time. After only a couple of weeks, he left that crew as well, and started hopping between different crews to find one he liked. Ultimately, he ended up as an officer in Moonlit.

After about a year of playing the game, Dyrbar was superior to Xazer in almost every puzzle. This motivated him to pillage and practice more to raise his stats, and he managed to reach at least legendary in each duty puzzle. Through this pillaging he had almost made a lot of money, and decided to get an estate on Fintan Island with Dyrbar. A bit of a control freak, Xazer soon had huge plans for how he was going to furnish it. Soon, however, he was overwhelmed by the size of the house. Real life also became more and more stressful, and he finally decided he just didn't have time for Puzzle Pirates anymore. Thus, he decided to quit, only to return about a month later.

Between 2007 and 2009, Xazer managed to quit and return to Puzzle Pirates four times. The original pirate was deleted, but a new Xazer was created in May 2009 in a final attempt to return to the game. At first the large amount of new stuff as well as the high doubloon prices was a lot to handle, but he soon found that getting money wasn't nearly as difficult as it used to be. He also found he was still good at most puzzles, to the point where he was considered "elite" enough to be able to join the crew Nightmare, where he has made many friends. After about half a year of building up his stats to what they used to be and earning the trust of fellow crew members, he was promoted to non-naving officer.

After quitting yet again during the summer of 2010, Xazer returned four months later and is currently active.