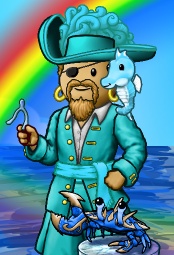 Wipley is a pirate in the Emerald Ocean. He is known for his love of pillages and playing hearts.

Wipley began his piratey life in April of 2008. He came back as a pirate who joined the YPP! early in its career, but left due to time constraints. His first crew, Terror Unveiled, was run by his friend Durga, with Wipley as a senior officer and first mate of the crew. After a good run with Durga and Terror Unveiled, the crew had a falling out, and Wipley left.

With a group of other senior officers of Terror Unveiled, (Tamiya, Caffineman, Deadpool, Clamchowder) Wipley created a no-captain crew called Viva la Vida- after the popular and successful Coldplay song under the same album name. This crew met many successes, and joined the flag Unforsaken. After Caffineman went dormant and Deadpool and Clamchowder quit, Wipley decided to venture out and join Omaris in the crew Fortunes By Blood. He and Omaris quickly became good friends, and Wipley found himself rising the ranks quickly. After a long stint with Omaris, Wipley decided to switch crews once more and join The BootLeggers.

He is now captain of the crew Impulse and a member in the flag My John Thomas. He loves playing Hearts.