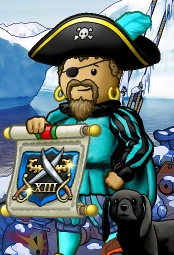 Caffineman, also known as Caffine, Caffi or Caff, is a pirate in the Emerald Ocean. He is an old school pirate known for helping greenies and returning players alike!

Caffineman started playing the game many years ago, introduced by his uncle, Basque. After serving Basque for a few months Caffi stretched his pirately legs and went off on his own ventures on the Sage Ocean.

Through many hardships and crews, Caffi found himself working under some of the biggest flags and crews, until deciding to start his own with his friends.

With a group of other senior officers of Terror Unveiled, (Tamiya, Caffineman, Deadpool, Clamchowder) Wipley created a no-captain crew called Viva la Vida- after the popular and successful Coldplay song under the same album name. This crew met many successes, and joined the flag Unforsaken. After Caffineman went dormant and Deadpool and Clamchowder quit, the crew fell defunct.

After many years Caffineman returned to his friend Wipley's new crew The Bootleggers along with his new friend he introduced to the game BigsBruce. After assisting them for a few months, close to a year, Caffineman fell dormant again, until November of 2020, when he and BigsBruce rejoined the game, finding the crew had since become dormant as well after many of the old heavy hitters such as Tommyr and Winklecat either played much less frequently or quit altogether.

Now pirates can find Caffineman on the Emerald Ocean helping old and new players alike, rekindling a long love of the game for the future! If pirates see him around Scrimshaw Island, they should be sure to say hello!