This article is about a Sage Ocean pirate. For the Cobalt Ocean pirate, see Deadpool (Cobalt). 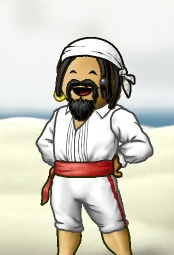 The pirate Deadpool plays actively on the Sage Ocean, and is not related to other Deadpools on other oceans. Currently, he is a senior officer of the crew Seafaring Dreamers of the flag Dreamers of the Seas.

Deadpool is an active pirate on the Sage Ocean. He resides on Admiral Island. His piratey career started in the crew Knight Stalkerz and after moving up to fleet officer there, he followed a previous senior officer of Knight Stalkerz, Master, to his crew Phoenix Force. Phoenix Force then merged crews with Tiablo's Corsairs under the captain Crebostrong, Master's brother.

He also is an active jobber and "part-time" member of the crew Killer Cords.