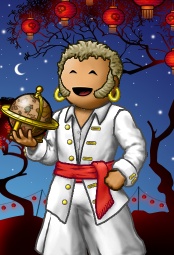 Tomrizzo is a senior officer of the crew Superman on the Emerald Ocean.

Tomrizzo began on the opening of the Hunter Ocean on April 20, 2006 at the advice of his (now deleted) pirate friend Adercantum. He mainly puzzled from the duty board occasionally jobbing on pillages with his two friends Adercantum and Croallzar. With the exodus of his two friends from Puzzle Pirates, Tomrizzo entered a period of dormancy.

Re-emerging in July of 2006, Tomrizzo jobbed for more crews and eventually settled briefly as a cabin person in the now revived The Black Hunters, captained by Pednuno.

He eventually met up with Adercantum and, at the suggestion of his friend, decided to join his crew. Adercantum was a pirate in The Dark Angels (now Dream Crushers) in the flag Vicious. After a short, and highly successful war brig pillage under the experienced helmsmanship of Purazz, Tomrizzo found the recently new captain, Fritz, who invited him to join the crew after the pillage.

Tomrizzo spent months with Dream Crushers; dating back to his earliest days on Puzzle Pirates but eventually left Dream Crushers due to personal reasons within the crew. He currently resides as a senior officer the crew Serendipity; captained by his long time friend, Belle.

Through continuous flag support, events, and notable dedication to his fellow mates; he was elected into the Rebel Rousers royalty. Tomrizzo continues to run in flag events and eventually wants to push forward to fully integrated ocean-wide events.

Tomrizzo briefly wore the crown as Rebel Rousers monarch in the absence of Belle. His reign was short-lived as he too often found the act of declaring war on alt-flags and merchanting flags of his opponents overly enticing. He relinquished the crown back to Belle, who has stayed the monarch ever since.

Tomrizzo was a senior officer of the crew Serendipity on the Hunter Ocean and a former royal of the flag Rebel Rousers.

On Viridian, he has settled into Infinite Depths as an fleet officer. He solely travels to Viridian to dock-tart and memorize sea routes for relaxation.

On Malachite, he was invited to the crew Stripped as a fleet officer by his old Vicious flag hearty Halee who had moved to Malachite. He spends most of his time memorizing Malachite as his infatuation for memmorizing oceans grows.