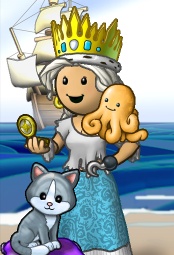 Stargazie is captain of the crew What Rum and princess of the flag Symonds Says.

Also known as Stargazy on Obsidian, Stargazie moved to Emerald after Obsidian's demise in the spring of 2019. She quickly found a home for her crew with friends in the flag All-Consuming Bobswald and remained there until her crew joined Symonds Says, where she has remained since.

She is currently working on memming the ocean, even though it is slow going!

Stargazie owns and manages many stalls and shoppes across the Emerald Ocean.