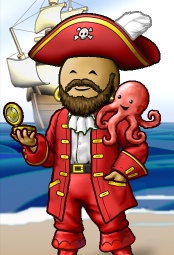 High Priest of the Cult of the Red Mantis, and titled member of the Looterati. Became the founding Governor of Jorvik Island upon its colonization by the Looterati, and oversaw the original development efforts there. Married in-game (and out!) to Lemur.

Squid can usually be found idling in his mansion on Jorvik Island, pillaging the Ruby Archipelago in his favorite war brig (the Red Mantis), or carousing in The Lord Nelson Arm. In the forums, he's known for his history lessons, bad songs and poems, and impatience with new players posting obvious ideas for the eleventy-hundredth time. During the Jorvik Wars, he was well known as a noisy propagandist and a hard-nosed diplomat.

Squiddles was rescued by the Pollywog on 2 July 2003, making him one of the last of the game's Alpha testers. He wandered around the Emerald Archipelago for a while before being recruited by Captain Uzi of the Orange Revolution. He survived the Penny Arcade onslaught at the opening of beta testing, was the first graduate of Faile's fledgling officer training program at the Puzzle Pirates Academy, and soon became First Mate of the Orange. He narrowly defeated Frederico to win a lime octopus (the first Cephil) in the Monkey Island Insult Contest. After the Nueva Revolucion colonized Cnossos Island, Squiddles became the proprietor of the One Way Inn.

In the closing days of Azure, Squiddles said his tearful goodbyes to Uzi and the Orange, and founded the Cult of the Red Mantis with a group of old friends. With the dawning of Midnight, Squiddles trimmed his beard and his name, becoming the Squid known today. In the early days of Midnight, the Cult tried independence for a time, but soon joined the Looterati, where Squid became a trusted advisor to King Spinn.

After recruiting the fabulously wealthy Wildrose, the Cult purchased Loom with a View, a weavery on Winter Solstice. With tremendous assistance from his senior officers, First Mate Iole in particular, the Cult recruited some of the Midnight Ocean's most talented and ambitious pirates, and enjoyed tremendous success in commerce and pillage.

After many long months of preparation and anticipation, Jorvik Island was finally opened for colonization. The Looterati took the island uncontested, and Squid was installed as the island's first Governor. In the weeks to come, he would manage the construction of the island's first civic buildings, bazaars and shoppes, and preside over a number of marriage ceremonies. He would also rally the defense of the island through its first blockades. At the end of his term, Squid did not stand for re-election; he was succeeded by the lovely Kmf.

Too much time spent with the Looterati turned Squid into something of a songwriter and poet. He was a regular participant in Eris' Poetry Corner, and won a number of creatively named sloops for his efforts there. He is also fond of song parody, and has enjoyed an ongoing creative rivalry with Madam/Thusnelda, Janthina, Pokey and others in many forum threads.

Squid is married to the delightful Lemur, and is never seen without Cephil, the red octopus he won in the Pirate Parodies contest of November 2004 on Midnight. The three of them may often be found enjoying their leisure around Jorvik Island.