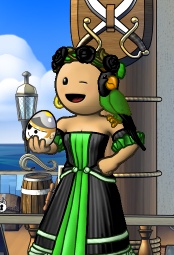 Also known as Thusnelda. Poet and Senior Officer of the Cult of the Red Mantis, member of the Looterati.

Madam can usually be found idling on the Jorvik Island docks or tearing up the forums. Contrary to popular thought, her opinions do not necessarily represent those of Homullus or his subsidiaries. Though her acid wit has gotten her in trouble on multiple occasions, she would rather be known as a champion of the right than a mute toady of the wrong.

As her previous incarnation Thusnelda, Madam joined the game in late 2002, when the screens didn't scroll and the islands looked like checkerboards. Thanks to her immediate forum contributions and lightning blade, she quickly rose to the then-highest rank of Officer in The Dastards, the most prominent crew at that time, headed by the fearsome Ursela and her first mate Duncan. In February of 2004, she sought out the company of likeminded intellectuals that only the distinguished Looterati could provide. Rescued by the esteemed Cult of the Red Mantis, she remains there today as a valued member of the fiercest female firing squad this side of Pussy Galore's Flying Circus.

Madam may tell you that she hates poetry. This is all a clever ruse. She has figured in the final rounds of multiple creative competitions such as the Octopus Sonnet contest of fall 2004 and the Sestina? Madness! competition of 2005, dropping out of the 2005 Poetry Deathmatch only because of a devastating injury to her gesturing arm. Like her captain Squid, Madam is also fond of song parody, and has enjoyed an ongoing creative rivalry with Sal, Janthina, Crystalclaws, Pokey and others in many forum threads. She is perhaps best known for her golden throat, singing and producing that breakout hit album "Heartbreaking Wind In My Sails," expounding upon the virtures of two prominent male pirates in song. For her victory in the "I'd do ANYTHING for a familiar!" contest of January 2005 on Midnight, she won a black and lime parrot named Pecker.

In her spare time, Madam runs a home for wayward wenches in the basement of the Nelson.