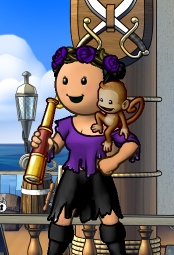 In November 2010 Shellgames returned to Malachite after a long hiatus and joined up with her old flag Enigma. She joined her dear friend WildSRose, entering into a non active crew with hopes of helping it get more active again! Things have changed considerably in the world of Puzzle Pirates and it will take some time to learn the new puzzles, crews and flags.

Shellgames created the crew Angels in the Midst on May 7th 2008, during the dawning of the Malachite Ocean. She captained the crew to, leaving behind most of her Midnight Ocean duties. Shellgames owns a ship stall on Chelydra Cove. The crew grew wonderfully cen be seen in the crew info pages. Shell was a princess in the flag Midnight's Massive Masts and left for a temporary stay in In Limbo. Shellgames and her crew joined the flag Enigma where she became a princess.

Shellgames (also known as Shell) joined the wonderful world of YPP on July 23rd 2005. Since then the road has taken many twists and turns, with loads of fun around every corner. Shellgames signed up with the first crew she met which was the grand crew of ARR who, at the time sailed under the flag Widows and Orphans. Pricklypete was the captain of ARR and he ran a tight ship. It was a grand crew for Shellgames, teaching her everything she knew about pirating, from blockading, shoppe tending, sailing the seas and running a well-trained and well-maintained ship. Shell was overwhelmed and overjoyed when she became a senior officer for ARR. It wasn't like most crews. This was an earned position, and it wasn't easy at all. It took many months of hard puzzling.

Pricklypete left the crew almost a year later and the crew changed drastically. They remained strong and well-trained but were on a different mission than the one Shellgames saw for herself. She took all the training, knowledge and well wishes from ARR and created Shell's Angels. The name was a joke to signify rebellion against the establishment. The crew was to be a temporary dalliance which turned into a strong force of friends and hearties.

Shellgames learned quickly that flags fight for crews almost harder than they fight for islands and before long was being courted by many to join. She chose Shake ye booty whose king Blackhammer quit shortly thereafter. She helped the incoming monarch, Gypsyginger reform the flag.

She left Shake ye booty for the Nomads under the kingship of Siborg (one of the finest pirates she had ever met.) Siborg shorty thereafter left the game and the flag, which left the Nomads barely standing.

Shellgames was going to do some heavy flag research before she joined another. Shell's Angels was courted by many wonderful flags. She wasn't ready to join any flag just yet but her hearty Seerauber (of Midnight Armada) was having a sinking blockade and Shell's Angels needed to join that flag if they wanted a shot at an injury. It was a temporary idea which turned into a long time committment. Sadly, within no time at all Seerauber left Midnight Armada - yet again, another monarch leaving a flag.

Unprecedented in the previous elections, Shellgames was elected for a consecutive second term. She was primarily elected by her own crew, which outnumbered the active members in the flag. Shellgames elected to leave MA effective December the 11th 2006, leaving behind the governorship as well as her royal position in search of an active and supportive flag.

After sailing under no flag for a few days, and after an incredible blockading experience, Shell's Angels joined the flag Carpe Noctem under the reign of King Phin.

Shell's Angels is extremely happy and flourishing under the flag Carpe Noctem, finally finding what the crew was wanting in a flag:

Today Shellgames captains the crew Shell's Angels with her best mates. She owns a shipbuilding stall on Turtle Island which was established in April 2006.