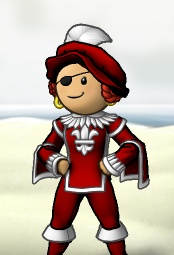 Known as one of the Emerald Ocean's more creative pirates, Sante is never satisfied to exercise her talents in a single venue. Among other things, she is the winner of several contests in the Mariner's Muse forum, a major contributor to the naming themes of several Sage's islands, and most recently the operator of Sante's Designer Ships, a service offering custom ship designs.

Currently, she is working on the prototype for this service, the Freudian Slip (a standard rename), as well as other orders from Sage players. To this end, she maintains Sante's List of useful fish names, a guide for unexpected standard renames.

Sante joined Sage Ocean on its day of opening as one of the founding members of The Lost Lot, where she has remained to this day. She is currently a senior officer.